Born with severe angular limb deformities, “Little John” was small and suffering from “windswept conformation” due to his position in the uterus and other congenital factors. Most severe was the toe-out conformation of the right foreleg (the off-fore). This case is an example of how good management combined with attention to farriery detail can be used to maximise the growth potential of a young horse in a successful attempt to normalise conformation. 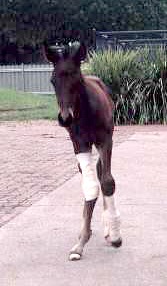 At 2 weeks of age, surgery was performed to elevate the growth plates just above the fetlock and carpal joints. At this time Little John was trimmed for the first time, and fitted with glue-on front shoes with medial extensions to increase the surface area to the inside of the leg. A severe deviation in the hock was also noted and trimming commenced on all 4 feet to minimise the conformation faults over time.

John went home from hospital to a stable from which he did not leave, other than to go to a very small yard with his mother when the stable was cleaned. He was placed on a low energy, low protein, mineral balanced diet, and mares milk of course. The mare retained good body condition but did not gain weight throughout this time, as it is important not to push the growth rates of a foal with this problem. A rapid growth rate will exacerbate the conformation problems in foals.

John was trimmed every 2 weeks until 3 months of age, with a slow but steady rate of improvement. Further surgery or shoeing were beyond the owner’s budget.

At 3 months John was moved, with his mother, into a larger yard, (just big enough to move about), with grass and the trimming program was extended to every 3 weeks.

At four and a half months the mare and foal graduated to a paddock. By 5 months trimming was extend to every 4 weeks.

Improvement in conformation was very slow from 1 – 2 months. Between trims the right fore foot became noticeably longer to the outside (laterally) and the inside heel was shorter and folding under.

Conformation began to improve noticeable between each visit from 2 – 4 months, and at 4 – 5 months the foot no longer distorted between trims and the conformation had significantly normalised.

John was weaned between 5 and 6 months, and shares a paddock with other weanlings. At his last trim his foot had not distorted since the previous trim and his conformation is continuing to improve. He will require monthly trimming by the farrier to minimise his conformation faults, up to and after 12 months of age. The hock and hind limb conformation problems have also improved over 90% and the prognosis for a normal athletic career and future soundness is good.