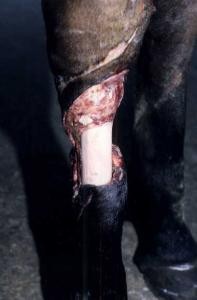 The injury to this Arab endurance horse resulted in a large flap which was removed because it could not be sutured in place and the lateral digital vein was re-sutured with very fine suture as it was only partly severed. The circulation was enough to maintain the foot and healing commenced. Both the lateral extensor and straight digital extensor were severed, and a large section of each was lost, therefore healing would result in only granulation tissue filling the defect. 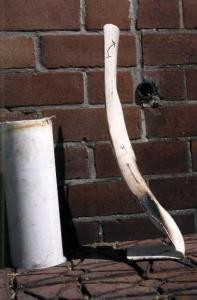 PVC water pipe was heated at the edge of my gas forge so that it would fit under the toe and sole, and then be bandaged without creating pressure on the front of the fetlock joint. This prevents the leg from knuckling forward. 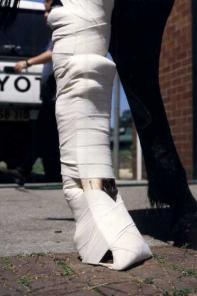 Fitted to the lower leg, it is bandaged from hock to foot. This allows the uppper limb to help to lift the lower limb ,and the horse then slides the foot forward. Note the splint is well away from the front of the leg at the top to stop it digging in as the horse moved. 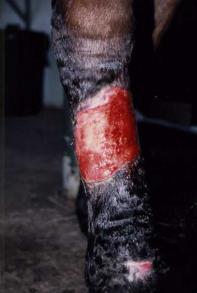 Healing to this stage was an ugly process at times, with dead bone needing to slough out of the wound and the granulation tissue being trimmed back, but at the time this photo was taken, granulation tissue has filled the defect after several months, and now the wound is failing to shrink or epithelialise further. This horse belongs to a Vet, and this made the whole process of saving the horse much cheaper. A lot of hard work and effort went into such a well healed wound. 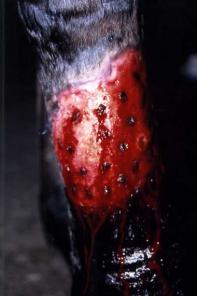 The first attempt at skin grafting with tunnel grafts failed, therefore, a series of punch grafts were used. The grafts all took, and the limb is now healed. Skin grafts must be placed into very healthy clean granulation tissue if they are to take. This leg was prepared thoroughly for the process. 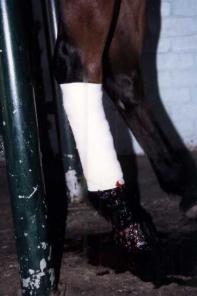 The grafts were covered in silverzene, and bandgaged in place. After 3 days this was removed, and they had all survived. Further bandaging was performed until the wound was healed.

This horse will never be able to be ridden as before but he has a long and happy life in front of him as a paddock pet.