Cushings disease – Equine Pituitary Gland Hyperplasia (EPGH) – describes a similar group of diseases in several species including, humans, dogs and horses. Equine Cushings is slightly unusual, in that the primary problem is usually enlargement of the pituitary gland (found at the base of the brain) due to hyperplasia or adenoma (hypertrophy). The pars intermedia of this gland is poorly vascularised and relies on neuro transmitters from the hypothalamus to control secretion. The main neurotransmitter is DOPAMINE which has an inhibitory role. A loss of inhibition by dopamine is responsible for excess pars intermedia activity. This is the beginning of a hormonal chain of events that results in Equine Cushings Syndrome.

Up to 10% of aged horses can be affected. Older horses are susceptible to the loss of dopamine, and recent research suggests that this may be due to oxidative damage. (Antioxidants should be part of the cushings/laminitic horse’s diet.) This is not a form of cancer. However, spontaneous adenoma (benign tumor) may also occur, and this may account for young horses that develop the syndrome. 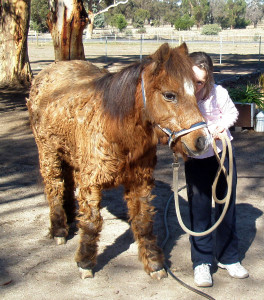 The end result in all cases is an excess of hormones produced without sensitivity to negative feedback from the end organ to say that too much is being produced. The effect is hypercortisolaemia (excess circulating cortisol).

The pituitary gland is situated at the base of the brain, and makes many vital hormones, including adrenocorticotropic hormone (ACTH), which functions to stimulate the cortex of the adrenal glands found close to the kidneys, to produce corticosteroids including cortisone and cortisol. Cortisol is the principal glucocorticoid.

Cortisone is a glucocorticoid with significant mineralocorticoid activity used as an anti-inflammatory and for adrenal replacement therapy. Corticosteroids raise low glucose levels and help regulation of the blood glucose level in an antagonistic role to insulin.

Insulin responds to high glucose levels and sends excess glucose into storage. Cortisone levels naturally increase during times of stress. Therefore, an excess of this hormone will result in mobilisation of stored energy from tissues e.g., protein and fat. Lipids from fat are converted to glucose raising blood glucose levels, and a breakdown of connective tissue occurs as a result of the excessive anti-inflammatory effects leading to the pot belly and weakness associated with advanced disease.

In EPGH. excess ACTH leads to excess corticosteroids from the adrenal gland, and the long-term effects of Equine Cushings Disease (EPGH) include decreased immunity, weakness, pot belly, unusual distribution of fat over the tail base, sides and even above the eyes, weight loss despite a covering of fat, increased appetite, thirst and urination, a long shaggy coat (most advanced cases) that does not shed easily in summer, browning of the coat colour and laminitic episodes or chronic laminitis that is difficult to resolve. Pneumonia and other infections due to the effects of excess cortisol on the immune system are advanced signs. Autumn may be the time when many cases become worse due to the effects of decreasing day length on hormonal systems.

As cortisol levels increase, insulin levels must then increase in an attempt to keep glucose within the normal range. A chronic unregulated elevation of insulin is diabetes. When the insulin and cortisol levels are tested in horses with EPGH they are often significantly outside the normal range, despite blood glucose levels being normal.

Usually the horse or pony is aged 15 or over when signs are noticed. Many cases are never diagnosed or treated. Treatment is effective in many cases and at least 2 options are available and can be used in conjunction with each other or singly.

The information in this site is the tip of the iceberg and only relates to my experience with this disease. If you are going to test a horse for this condition gather as much information for yourself and your vet and then you will make better choices. The following is a guide only.

If your veterinarian suspects this disease, it is worth testing to try and confirm if this is the case. Several different tests are available. However, I have had good results by testing the level of insulin. If normal, but the horse has symptoms, you may be one of the 30% that tests negative despite having the disease, and another test may be required. I like to combine insulin, cortisol/or ACTH and glucose as my tests. This gives me a start. Your vet will discuss all the options with you. Please note; all the horses I have suspected to have the disease and then blood tested, have so far tested positive for high insulin or insulin and cortisol, despite some having only mild symptoms. I also have to take financial restraints into account and whether I am going to conduct a treatment trial regardless of test results.

Other tests include Basal ACTH level and comparison of morning and evening cortisol levels. There should be at least a 30% decrease in levels in the evening in normal horses. Cortisol alone is not considered reliable due to its widely varying level over time. Low dose Dex test, TRH test and other tests are available.

Feed roughage e.g. some hay etc. in the evening prior, and then you must organise to test first thing the next morning. You must not feed the horse. You should not feed or move any other horses as this may upset the horse to be tested. Ideally a very calm and comfortable horse with no current pain or problem will give the most accurate blood result. I organise to collect blood first thing in the morning so that the owner can then feed up as normal once the blood has been taken. Use the correct tubes, keep it chilled and get it to the lab promptly.

If your horse has the symptoms of this disease and tests confirm this, you may wish to begin treatment.
The options include:

A low energy, high roughage diet with balanced minerals and supplementation with antioxidants form part of ongoing management. Obesity should be avoided. Refer to the laminitis diet for further information on feeding.

Many ponies and horses are diagnosed only when they have developed very severe symptoms, or are not diagnosed because people think that the changes in the way the animal looks are associated with old age, or that laminitis is due to other reasons. Life expectancy depends on the age of the horse or pony when treatment commences and the response to the medication or herb. Some go well and some do not. The more debilitated and advanced cases have a poorer prognosis than those cases where symptoms are detected and treatment commences early in the disease process. No treatment will result in ill-health and a shortened life expectancy.

Laminitis, which is poorly responsive to other treatments, is a sign of Equine Pituitary Gland Hyperplasia (EPGH). Laminitis is the second most common cause of death of horses after colic. Treatment of the primary disease is always an essential factor in control of laminitic symptoms and prevention of further damage to the feet. When the cortisol level is controlled, the insulin responsiveness of the hoof lamellae is restored.

Hypothyroidism is also anecdotally associated with an increased risk of laminitis. Therefore, if you have an older horse with recurring moderately severe laminitis, it should be tested for Cushings disease and possibly hypothyroidism, and if necessary treated.

Not all horses with EPGH develop laminitis, or a long coat. If they have any 3 of the symptoms, and are 15 years or older, it should be included in the differential diagnosis list, and tests performed to prove that it is, or is not, the underlying cause of the symptoms your horse has.