DO THE COMPARISON TEST 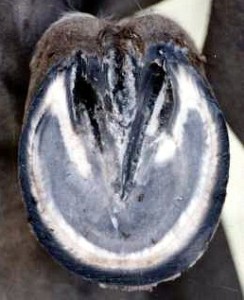 Does your horse have healthy feet? Using this photo as an example, compare yours horses feet next time the farrier is there. This foot is two equal halves either side of a centre line (balanced). The sole is concave, (the sole can descend under load without causing sole pressure and pain). The white line is white, not stretched, red (bruised), black (necrotic) or laminitic. The foot is in the process of being prepared for a shoe which, when fitted, will cover the heels and extend back to the widest part of the frog. Are your horses shoes long enough?? There is no bruising in the space between the heels and bars or along the laminae of the bars which have been trimmed level to the sole. Overall this is a very healthy foot. 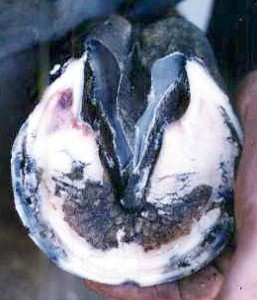 Compared with this foot which has a serious area of bruising between the outside heel and along the bar, (a corn). The heels are contracted. This indicates decreased heel function and potential circulation problems. This syndrome is known to be associated with navicular disease. This horse’s problems were contributed to by shoes fitted too short, combined with wedges. This resulted in further collapse of already long low heels and bruising. When re-shod with balanced feet and shoes 1 size larger the horse was improved immediately.

A RACEHORSE BEFORE & AFTER 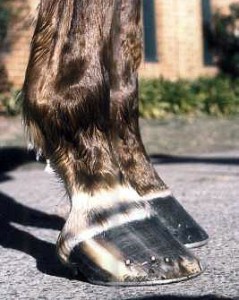 The horse has a broken back hoof-pastern angle, this leads to increased pressure up the front of the leg and increased stretch or strain to the tendons at the back of the leg, in other words it contributes to osteoarthritis, shin soreness, carpal bone and fetlock joint problems and bowed tendons. These feet are well overdue for shoeing and the shoes look untidy. This probably means they are loose. This horse already had a carpal bone chip fracture when this photo was taken. 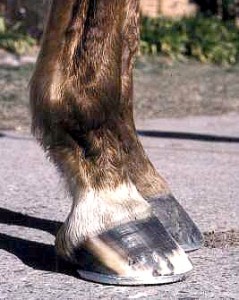 The hoof- pastern angle is normal. The nails are in the front half of the foot and are about a quarter to a third of the way up the wall at the point of exit. The shoes extend far enough back to provide a platform for the heels to expand on under load and allow for growth of the foot over time which will pull the shoe forward. The clip is the same angle as the wall and was seated into the wall and not tapped back.

HORSES BREAK DOWN FROM THE GROUND UP!

The muscles of the leg have no control over the landing phase of the galloping stride; the hoof is like a pendulum on the end of a piece of string – it is thrown out and falls to the ground. Correct, balanced shoeing maximises stride potential; it does not lengthen it. Bad shoeing can shorten the stride, waste energy and cause breakdown. Galloping horses carry the whole body weight on the leading front leg. As the body is propelled forward from behind, the carpus, suspensory system and flexor tendons are under enormous strain and the front legs are most likely to break down at the weakest point or site of previous injury. Horses cannot run fast with sore feet, but I have seen many that try, failing to run on at the end of a race, lifting their heads instead of accelerating, running off at the bend, climbing or running slower than expected and pulling up distressed. This conforms with the concept of V Heart rate Max (VHM) this means that maximum velocity (speed), maximum heart rate, maximum oxygen transport and uptake are all reached at the same time and the horse then cannot go faster and is about to begin burning energy in the cells anaerobicly (without oxygen) this process then accelerates the production of lactic acid which rapidly brings on fatigue and the horse’s athletic potential has been reached. Training can increase a horse’s VHM but many factors such as maximum heart rate are genetically determined traits. It is now known that lameness will lower performance by causing a horse to reach it maximum speed, heart rate and oxygen transport to the cells (VHM) earlier.

Therefore, the horse will not be able to go as fast for as far despite having the same degree of fitness that it had when it was not carrying an injury or unsoundness.

Never underestimate the effect of even a mildly sore foot on a horse’s performance.